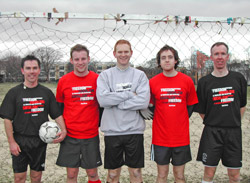 Yesterday was a fine occasion – a festival of football, a chance for old friends to gather together for the first time in ages, and a wonderful meal to cap it off. It also brought together five of the six Players of the Season (see photo, right), barring Raj, who unfortunately was on Labour party duties.

Great efforts to attend from the Legends, especially from Stefan, who flew in from Zürich, Lele from Rome and Joe from Cardiff.

The match was played in freezing, blustery conditions and was hard-fought, fair and entertaining. The pitch did not make things any easier for either team – it was nicknamed the Sand Siro by Filippo and brought to mind Churchill's pronouncement that 'We'll fight them on the beaches'. 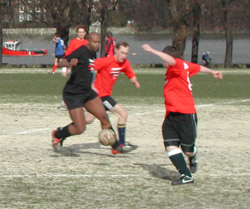 The Legends team – true legends of the club to a man – put up a sprited performance, and an impressive one given that they hadn't played together for so long, and given the difference in average ages between the two teams (the Current Stars had a nine-year advantage). Referee Tisdale was once again the epitome of unflappable fairness, rarely stopping play – although this may have been as much because his whistle didn't work as anything.

Attack was matched by defence, and most of the occasions when someone got through on goal were wasted. The goals were: a classic move from the Stefan–Neil combo in the first ferw minutes of the game, and a free header by Mauro early in the second half. Debuts for the Current Stars by José, Rinaldo and 16-year-old Mikey. 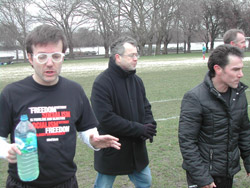 We then moved to the Alma Tavern, site once again of the classiest meal ever enjoyed by PFFC.

Full match reports are available through the link below. These are in parallel form – one from the Stars team, written by Mauro and Crispo (Marco IV), and one from the Legends, written by Stefan. Enjoy.

Click here for the match report by Stefan, Mauro and Crispo

Stefan, for the Legends

Mauro and Crispo, for the Current Stars 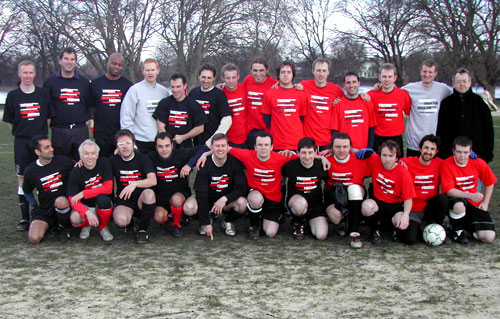 On Tuesday, after the game, I met a colleague from Global Witness. After discussing some political campaigning concerning Angolan money in Swiss banks and trying to entice her to enter a team for the International Slow Football tournament next spring, I directed her to Philosophy Football FC's website, where PF's ever alert cultural secretary already had placed some pictures of Sunday's match. My colleague recognised me without hesitation, because, as she put it, I must be the one with the two layers of -shirts as the weather in snowy Switzerland can't prepare one sufficiently for the relentlessly cold wind in London.

Indeed. Or indeed not. How PF's esteemed designer-chairman can design his beautiful t-shirts short-sleeved and how some of the assembled Legends and Stars were prepared to play in them in the freezing temperature will be one of the eternal English mysteries to me.

Despite the early Sunday kick-off and the polar weather conditions, only a few Thinkers failed to recognise the entertainment value and social importance of such an event. Once again former PF players travelled from abroad to participate, showing us what being part of this team meant for them. But we all know that and that's why we were there, standing proudly for the official picture and feeling the match at its most, despite the friendly character of the event.

So what's new? The Legends turned up full of cheerful expectation. Raj was late. Very late. Indeed, so late he didn't even show up, because, as some reliable source will have it, as Leader of Camden Council he had to take over on short notice from the suspended Mayor of London, Ken Livingstone. On the other hand, Geoff's majestic managerial performance from the touchline seemed a slightly weak excuse for not putting himself in the line-up and on the line. 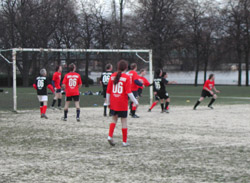 The Stars seemed to my eye to be awfully young and fit, but the Legends started the more brightly, while the Stars dreamed about a stroll in the park (or this early morning's party). After barely one minute, Cornish Al swung the first corner into the Star's box. After five minutes, the Legends found their rhythm with some neat interplay. After eight-and-a-half minutes Stefan got the ball in his stride, played a pass behind the last defender, Neil latched onto it and finished clinically – oh, how it felt like old times! Dennis and Lele began to dominate the midfield, Al started some searching runs, a header by Brian after a corner went narrowly over the crossbar. After twenty minutes Neil returned the favour and put through Stefan, who beat the keeper only to hit the goalpost from where the ball bounced back to Neil, and Mr. 110% missed from five metres out. That's the result of playing too much with a funny-shaped ball.

The match was well played and hard fought. The first half saw the predominance of the Legends, playing in black, who managed to take the lead in the early minutes, revealing how 'well-living' these Legends are. Cornish Al was often seen in the middle of the action and excellent moves from Stefan and Neil eventually led to the latter finding himself face-to-face with a helpless Crispo (aka Marco IV) who could only surrender to the neat finish of the experienced forward. The Legends kept pushing and came very close to scoring again, giving the Italian keeper a chance to make up for the earlier goal with some great saves, especially from the almost irrepressible Kiwi striker.

After that scare Stars skipper Ally rallied his troops, and his team started to win more possession. But Filippo and Joe closed the corridors, Brian and Paul dealt with the aerial threat through the middle, so the Stars were reduced to some speculative long-range shots, one hitting the corner flag – admittedly, the pitch was very narrow, so the corner flag was not too far away from the goalpost. Nevertheless, the pressure on Rob's goal rose, and when Joe sliced one ball high into the air, Filippo's cry of 'Dio mio' rang over the pitch, only for Joe to scramble back and clear with a header onto the bar for a corner. However, the through-balls for the Legend's strikers dried up and in the cold wind I began to miss my warm Swiss gloves. Nevertheless, we held on to our slight advantage.

The second half opened with the Current Stars reorganising themselves in an attempt to turn things around. Vipul came on for Rinaldo and Dodo stepped out to allow the debut of Mikey, at 16 years of age the youngest PFFC player ever.

Both managers and captains uttered some stern words during half-time, but the Stars came out with more intent, hitting the goalpost once, then, with a fluent move, found Mauro, who directed a neat header into the net. Another shot hit the Legend's upright, and then Rob cleared spectacularly with his legs. Would there be a repeat from last year, when the Legend's hearts and spirits were cruelly broken in the second half? Cometh the time, cometh Tamber to put in some flying tackles, and astonishingly enough, the game swung again. The Legends hit the Stars on the break: Stefan battled to the sideline but his cross was too weak; Richard's throw-ins became a constant threat; Al's drive was just off-target; and then Stefan sent Neil clear with a wonderfully timed pass (I am still full of admiration when retelling it), but Neil, with all the time in the world, could not beat the keeper. That's the result ...

Slowly but surely the Reds brought the game back into their hands. The defensive play was tight and managed to successfully contain the no longer irresistible Black incursions. Kieran and Rob gave extra weight in midfield where the skilful José, still in the process of getting used to English football manners, had realised that this was a football pitch rather than a rugby one and started playing the ball forwards. The unprecedented upfront duo of Ally and Mauro was bound to benefit from such a healthy resumption. Soon the restless captain slalomed down the wing and served a wonderful ball to the head of the tall striker for the much awaited and even more deserved equaliser.

For the last ten minutes, the Legends laid siege to the Stars' goal, with corners and throw-ins coming in quick succession, and Paul and Brian a constant threat in the Stars' box. Al delivered one last corner in injury-time, Stefan failed to connect, the ball fell to Richard who calmly collected himself, took aim for several agonising seconds – only to miss from four metres out. Ten seconds later the referee mercifully blew for full-time.

The match slowed down, legs starting to feel the sandy pitch, some players (including the authors) experiencing the incompatibility of a Sunday morning football fixture with a Saturday night out, but more crucially a general acknowledgement of the fairness of the score rapidly and conveniently spreading among the more tired players (most of us, if truth to be said). When the excellent referee Hugh blew his faulty whistle celebrations began, only to continue at another venue, The Alma, where another game was going to be played, one we are all very good at. Food.

So it ended 1-1. It was a fair, nay, the right result. Afterwards, in the changing room, it was noticeable that the flip-flop faction has greatly increased, but that the hot water was as lukewarm as ever. And then to the Alma Tavern, with English cuisine and social interplay and Gramscian civil society at its incomparable best.

Another wonderful day out for Philosophy Football, one of those that will deserve a special place in next season's Review and one that will definitely stick in our memory for long time.

[back to the top]