Philosophy get their brains in gear for Paul's sake

After a long summer that included joys and woes in the shape of the European football championships in Eastern Europe, our three-sided tour to Bilbao and a wonderful London-based Olympics, Philosophy Football FC was keen to return to some sense of the normality of the beautiful kicking of a ball at home in London. With the governing authorities of both the Euros and Olympics having enormously questionable relationships with certain global multinational companies, it was only right that Philosophy countered the corporate-dominated status quo by taking part in the annual Paul Adamson memorial tournament. 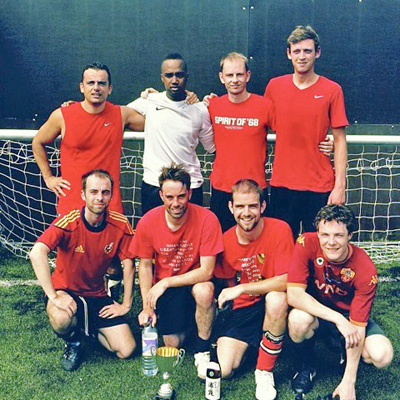 An eight-man Philosophy squad assembled in a delightfully blooming Brixton early in the morning, ready for action – or so we all thought. In the first game slow thought came to dominate Philosophy’s play, which we lost 4-0. A quick analysis was made and though it was clear we were having difficulty adapting to the heat the team needed to bring some dynamism and energy into its play. In the second and third group games Philosophy recovered and won convincingly with Mario, Michele and Rob defending resolutely and smartly, with Ally, Will and Simon providing creative outlets.

The quarter and the semi-finals saw Philosophy progressively get their brains and legs into a higher gear, as they started to display more dynamic play, supplemented by intelligent and coherent substitutions across the squad. Ally’s ‘Spirit of 68’ shirt, together with his, as well as Simon and Will’s craft, provided inspiration to the sun-baked Thinkers. It was the guile of the Philosophers together with Kadeem’s safe hands at the back and his ability to identify space and the runs of teammates that proved to be the ingredients that propelled the squad to the final.

The final pitted a collection of Scots (rumoured to be a team of former Scottish Labour MSPs in exile) against a Philosophy team ever growing in confidence. Yet this confidence was checked somewhat by the realisation that Philosophy FC lost the tournament two years ago in a heart-breaking penalty shoot-out. A modest realism was evident throughout the team as Ally was provided a final call to collective action.

The Reds started the game well and it didn’t take long for creative moves to take shape with a couple of half-chances further consolidating the team’s confidence. The Scottish team (perhaps still down in the dumps following the SNP's political domination north of the border) showed little ambition and seemed to welcome the Philosophers' progressive play onto its defence.

This year, a single goal determined the Paul Adamson memorial tournament, and it came for the men in red. Unmarked in an advanced position Will shaped a beautiful curler into the bottom corner with the keeper well beaten – a fitting finale for surely the player of the tournament. This and other inspired moves made it a surprisingly one-sided final, with Philosophy showing the creative imagination to be the first team in the tournament’s history to win the Paul Adamson cup twice. A bottle of sake was presented to the Philosophers and this is likely to be enjoyed at a future event – perhaps the moment we step up even further and win the Grafton Millennium league. Bring on the new season and Believe!