This was a fine game of 3sided that certainly ebbed and flowed. At one stage it looked like being a runaway victory for Husaria, but a combined effort from the Philosophy boys and AA saw three goals bulge the Husaria net in the final 5 minutes. Husaria were playing a debutant, Marian, and boy was he handful. A shot like a cannonball and built like the proverbial outhouse. 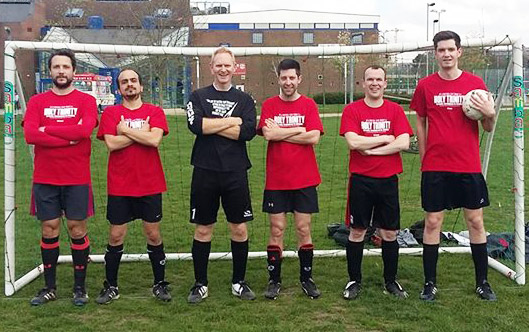 The game was well marshalled by our immaculate boys at the back, Duncan and Miguel. It also saw the welcome return of our Northern brethren, Owen Mather; it was great to have him back in the Philosophy red again. Owen proved he hadn’t lost his touch, nor his swagger, by blasting over at close range and claiming the ball had hit a tuft before he connected! On Fordham Park’s billiard table of a surface? Never. The whole team – Duncan, Mark, Miguel, Omer, Owen and myself – played really well together, with good teamwork and, where necessary, good combination work with both AA and Husaria.

Onwards now to May, chaps.