September 2017, and it’s time to dust off the cobwebs. We welcome back wee Andrew Finnerty, from what seems the distant days of 11-a-side. Andrew teams up with seasoned seasoned 3sided pros Ömer, Mark Mayo, Rob and a new recruit, Gurel Kangal. 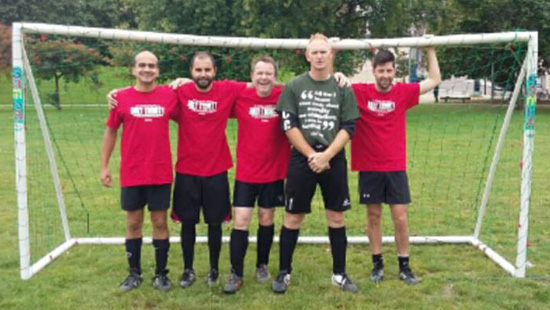 Back to the ‘main event’, which starts at a frenetic pace, almost like we’re all trying to prove ourselves. As a result, we are caught out of position several times and fall behind to 2 quick goals. Deptford also concede one, which leaves Husaria leading at the end of the first 20mins. In the second third, Rob unfortunately has a Paul Robinson moment when the ball bounces under – under! – his hands and PFFC reach the second break 3-1-1 down. We manage to haul back some prestige in the final third as Ömer, Gurel and Andrew put the Deptford goal under some pressure. It looks like we are heading for a losing draw (1-3-3) until a fourth goal sneaks past Rob, and we start the season with a Husaria 1 Deptford 3 PFFC 4 defeat … ah well, there’s always October!