The Battle of Wandsworth Common

PFFC returned to Wandsworth Common, where we lost 3-4 to Sporting Tooting  last season. There was a welcome return for Rob the Cat between the sticks, and debuts for Sam (our second North American player) and Dan. The red men started in 4-4-1-1 formation, with the full backs encouraged to get forward and support the midfield and attack. 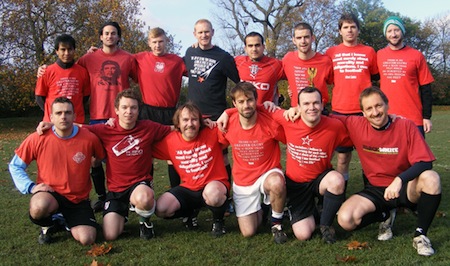 The first ten minutes saw both teams getting used to the heavy pitch, and then PFFC broke down the right, put a hopeful ball across to the left-hand corner. The opposition left it to go out, but Alex chased it down, spun and delivered a great cross to the right, which was met by Ömer, who put a fantastic looping header in the top left-hand corner: 1-0 to PFFC.

About 25 minutes in, Tooting won a corner. This was well delivered towards the middle of our six-yard box and was met with a powerful header high into the middle of the net. 1-1. Another corner won by Tooting just before half time made it 2-1 at the near post with the ball getting stuck and just crossing the line: 1-2 at half time.

Spirits were up at half time, PFFC having a couple of chances and playing the better football. The team talk contained a reminder that the next goal would be crucial, and changes were made: Khan on for Andy and Dan on for Paul. However, the opposition refused to come out as they argued amongst themselves about substitutions, with the ref finally having to drag half the team onto the pitch. The red men by comparison made their changes without any fuss: football is a team game...

PFFC started the second half brightly. A blatant handball deep in Tooting's half is played on by the ref, and the ball found its way through midfield to Sam who smashed a half volley from 25 yards out, a brilliant strike which left the keeper floundering: 2-2. Tackles were flying by this point in but the red men stood firm until a very late challenge from the opposition skipper which could easily been a red card. The ref only booked him; he was very lucky to still be on the pitch. PFFC continued to play the better football with Paul and Ömer dangerous on both flanks and Alex and Matt finding space. The next goal was a thing of beauty: fantastic interplay between Ömer, Alex and Matt ended with the latter curling the ball in the bottom left-hand corner: 3-2!

Soon afterwards, Matt was put through by Ömer and finished coolly to make it 4-2, before a bizarre free-kick decision against Mario for a perfectly sound tackle made it 4-3. Andy was brought back on for Owen, Khan switched to left-back and Paul came back on for Ömer at right midfield. Straight away Paul made an impact, putting the ball through to Matt, who passed the last defender before rounding the keeper. 5-3 and a very well deserved hat-trick! Tooting pushed hard for another goal. The ref awarded a penalty for the ball striking Dan on his elbow while he was turning away from the ball. It was a harsh decision, and Tooting scored to make it 5-4 to PFFC.

Tackles were really flying in from Tooting at this point and the match started to get out of control. Then in the last few minutes of the game, the ball was played out left to Paul, who dragged the ball back before being completely taken out with a two footed lunge from Tooting's skipper. Play had to be stopped for 10 minutes to help Paul off the pitch for what in my view was as clear a straight red card for violent play as I’ve seen in 30 years watching and playing football. The challenge broke Paul’s leg.

The worst five words in football are: "But he got the ball." Generally heard from those who only care about the result and nothing more. Football is the beautiful game, but you wouldn't know this from the continual moaning, whingeing and all-round poor sportsmanship from our opposition. These events have now become a matter of complaint between PFFC and the League, and a further update will follow.

Alex Salinas – "We are meat-eaters!"
Andrea Giannotti – "The tide is turning..."
Andrew Finnerty (with apologies to Eric Cantona) – "Always trust your team-mates..."